The intense wildfowl migration at Cape Põõsaspea was mentioned in the ornithological literature already in the 1950’s. At that time was pan-Baltic monitoring arranged by Erik Kumari, and Cape Põõsaspea was one of the several sites to be covered by systematic visual observations. After that it took 40 years for the place to be rediscovered, as the site was the restriced border zone of Soviet Union. In 1992 Estonia got reindependence and the cape was opened to public again. Bird observations were sporadic until 2004 when Estonian Birding Society (Viron Lintuseura ry.) made a major effort and monitored full season from July to December. The results turned out to be ground-breaking. (Download the report in Finnish with English summary). Monitoring was repeated again in autumn 2009 (results). Results were published in Hirundo. In autumn 2014 the monitoring season was covered again, and you find report here. 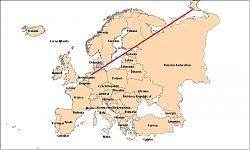 Many arctic and boreal birds that breed in North-Western Russia between the White Sea and Taimyr migrate to and from their East-Atlantic wintering grounds through the Baltic Sea. This migration route is called the Siberian / East-Atlantic Flyway. In autumns Cape Põõsaspea lies in the middle of this flyway. Furthermore, the place is a distinctive bottleneck site of this flyway.

Birds that use the Siberian / East-Atlantic Flyway include wildfowl, waders and gulls, among others. Their breeding grounds in Northern Russia and their marine wintering grounds are mostly extremely difficult to monitor due to the vastness of these areas. Fortunately many species migrate in big flocks along narrow flyway corridors and that is where their populations can be easily monitored.

During avian migration in autumns, a major flying corridor of Siberian / East-Atlantic Flyway starts in the White Sea, runs to the Gulf of Finland, and continues to southern Baltic Sea and onwards. The south-westerly flying direction brings the birds to the southern edge of the Gulf of Finland where they tend to follow the north coast of Estonia.

The migration in Cape Põõsaspea

Birds usually come close to the shore in Põõsaspea. It is therefore possible to gather information on the age and sex structure of populations as well as their numbers.

Species that concentrate on migration in the bottleneck between Cape Põõsaspea and Osmussaar Island (with strait 7 km wide between) include:

Monitoring results in autumn 2004 and 2009 included totals equalling to 10-60 % of the Siberian / East-Atlantic Flyway’s* populations of several species, including Red-throated Diver Gavia stellata, Scaup Aythya marila, Pintail Anas acuta, Brent Goose Branta bernicla and Barnacle Goose B. leucopsis. The collapse of Long-tailed Duck’s Clangula hyemalis population was clearly showed by monitoring results.
The breeding success of many species was evaluated in 2009: about 400.000 birds (out of 2,1 million) were aged during the season. The results showed that breeding had been failed for most arctic species, including Long-tailed Duck (proportion of juveniles 3 %), Common Scoter (1 %), Velvet Scoter (6 %) and Brent Goose (6 %).